I experienced physical uneasiness days before my brain registered what was happening.  It seemed as if emotions long unfelt lay just below the surface, ready to explode out onto everyone with whom I interacted.  Then, I looked at the calendar and realized I was days away from the 7th anniversary of the last week of my father's life.

As if on cue, deep, painful emotions bubbled to consciousness, bringing with them the memories from that week.  I wanted to turn off my emotions or take my heart out for a few days and place it in a special jar for safe keeping.  It suddenly became clear to me why two of my favorite shows used these two methods to escape the darkness of mourning.

I continued to do my work and interact with a smile with those around me, but the wolf inside impatiently waited to bare her teeth in a snarl for anyone who dared bring difficulty to my door.  Tears threatened my composure, but I pushed them back by living up to the meaning of my name - I helped comfort others whose pain dwarfed my own.

While the Super Bowl is a time when Americans laugh, eat, shout, and enjoy the latest million dollar commercials, I remember...I remember the night my father passed into another realm 7 years ago.  I don't know who played or won that game, and I don't really care.  Nothing else mattered that night except that the man who taught me how to catch bees with my bare hands and set them free without harming them was now gone.

He never lived long enough to see any of my books published, but his presence can be found in all of them.  As for my upcoming release, Billiard Buddies, my dad - a gifted bartender or "mixologist" as he liked to say - would have smiled to see his gift to me became the center of attention for Gina.  I don't have that pool stick anymore, but I'll never forget what it meant to me.  Her father also died before the story began.  I suppose writing it became therapeutic. It's often said authors write what they know.   Even so, Gina's story has a life of its own that I could never claim as mine.

So, is grief any good?  Sure, I don't think so while I'm living through it, but I'd never give up this proof that I'd loved deeply and lived courageously for anything. I also take comfort in the words, "Blessed are those who mourn, for they shall be comforted." (Matthew 5:4 ESV)  It's what helps me see that grieving, though unwelcome, can sometimes be good.  I remain grateful for the family and friends who share my journey with me.  I do not take any of them...or you for granted. 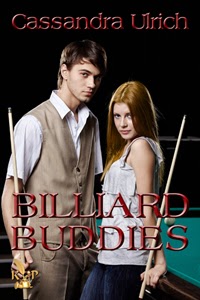