I did it! I wrote over 51K words during #nanowrimo2021 in a genre that is new to me--Dark Fantasy. My first story with a cop and a vampire debuted during #nanowrimo2020, and now it's been joined by the second part. So far, two critique groups have raved about the story. I can only hope part two lives up to the praise. I also wrote two other stories: one about a demon-spawned sixteen year old guy and the other about a prince who's been cursed to be bound to his castle for centures due to a witch's jealous rant. I have plans to include these stoies in a Dark Anthology and will let you know when its ready to be released. Editing will be the theme during 2022. 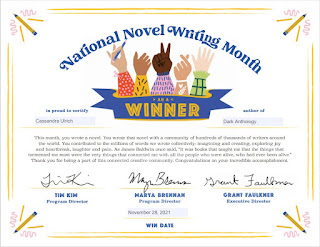