Kressa woke up and got ready. It was Monday, and school would start the next day. She felt a little nervous about attending, but her mother made it clear that she would have to be cooperative.
She inhaled deeply after she got dressed and peeked out one of the many living room windows that overlooked the small hill behind the mansion. She noticed Brad racing his horse to and fro, between the house and the American elm forest out back. He rode fast. The speed that Brad and Silver Bullet traveled amazed Kressa. She quickly ducked behind a huge plant next to the window so Brad couldn’t see her. After a few seconds, Kressa peeked out again and wondered where he had gone. Without any warning, both horse and teen galloped out from the forest toward the house. Kressa hid again and waited.
Kressa almost moved away from her hiding place when she realized that Brad headed directly for the apartment. She closed her eyes and stood still.
She reopened her eyes only to see him move away, so she made a mad dash up the steps to the kitchen. Kressa grabbed the silverware and napkins her mother placed on the counter, said a quick “Buenos Días”, and headed to the dining room. She stopped dead in her tracks and dropped the items she carried clumsily onto the table. Out of breath, she struggled to recompose herself.
As Kressa caught sight of Brad entering the house and turning to go upstairs, she let out a huge sigh. She had escaped being discovered. Suddenly, she remembered the handkerchief she meant to return before breakfast. She ran to meet him before he walked too far up the stairs.
“Brad, I wanted to return this,” Kressa said, removing the handkerchief from her pocket and holding it out with her right hand.
“You can keep that if you like just in case you need it again.”
“No, I have something else I can use. I washed it and ironed it for you. Here,” she said, walking toward him with her arm extended.
Kressa experienced an odd sensation pulsate up her arm when their fingers touched. First, my heart flutters whenever he looks at me and now I’m feeling strange tingles. What’s happening to me?
“Thanks for cleaning it. See you at breakfast,” Brad said in a friendly tone and turned around to continue up the stairs. 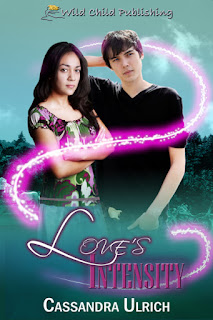 Cassandra’s Bio: Cassandra Ulrich was born on the beautiful island of St. Croix, United States Virgin Islands, located east of Puerto Rico.  Living in the tropics fueled her imagination and day dreams.  For years, she wrote poetry and entered competitions.  However, only many years later did she discover joy in writing stories longer than a few pages.

She published her first young adult novel, A Beautiful Girl, in April 2011.  The inspirational novel has already touched many hearts ranging from teens to adults.

Her second novel, Love’s Intensity, is a teen paranormal romance and was released on July 11, 2013.

Her third, Billiard Buddies, a New Adult romance novella, was released on May 24, 2014.


In June and August 2014, she also released two poetry books written while in high school and college.