After watching and reading tons of stories involving telepathy, I wondered what would happen if a person was genetically wired to communicate telepathically with only one person on the planet - her soul mate. Then, my brain had to complicate matters by delving into what happens when they don't marry each other.

"Love's Intensity" is a dramatic story of teens, Brad and Kressa, whose parents, Bradford and Nina, have a connection that can only be complicated by the fact that Bradford hires Nina's family as live in workers at his home. All it takes is one kiss to heat things up. Oh, and don't get me started on Brad's stepmother, Rosetta, and Kressa's dad, Julio. Who knows what will happen with all this fire under one roof? How long can Brad and Kressa's parents keep them apart? 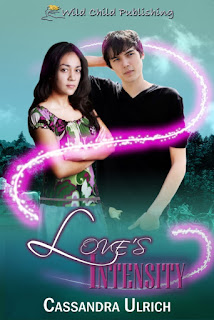